What do you associate most with the Westminster Kennel Club Dog Show? Chances are it’s the Select Seven final and the dog that walks away with the title of America’s Dog for the next year. It’s the ultimate climax to two days of intense competition that takes the dog and handler through a corridor of breed, group and ultimately Best In Show judging.

It’s the ultimate showcase for dogdom – New York City, media capital of the world, and nationwide live television exposure. And, of course, to the winner goes the whirlwind media tour the following day in New York City, with stops at major morning talk shows and photo ops at Sardi’s Restaurant and the observation deck of the Empire State Building.

But it’s the earthy back-stage, outside-the-ring stories that resonate with many dog owners, too.

Here are several special ones you haven’t read elsewhere and culled from hundreds of Media Information Files submitted this year:

Shortly after Christmas, Okashima was working late in her store, taking down holiday decorations. “I was in the back of the store when I heard George alarming ferociously, in true beagle fashion. I came out of the back room to find George’s nose up against the glass door facing down a would-be intruder trying to get the door ajar,” she recalls.

His alarm allowed Okashima to get a good look at the culprit. A 911 call was made and the man was arrested shortly thereafter. He was thought to have ties with a string of burglaries of local businesses.

“Solid and big for his inches. Indeed. Not to mention, my hero,” says Okashima.

“George is the toughest little dog I have ever come across,” she adds. “I have up until now only owned American Staffordshire terriers, all of which were rescues. I have also, for the better part of 20 years, done bully breed rescue, specializing in tough cases.”

George became a registered therapy dog (Therapy Dogs International) in 2011 and a service dog in late 2013. He also owns CD and Rally Novice titles. In addition, George is a hiking and snowshoe partner for Okashima.

Ticket is a therapy-dog hero, visiting hospitals with cancer patients, hospice wards, a children’s hospital and has been adopted by a school for special-needs children. She is also a courthouse victim-witness dog, where she is a steadying influence on children and victims of violent crime.

She also does a yearly domestic-violence education program in junior high schools and has her own Facebook page where children can keep in touch with her.

“Becoming a champion and participating in Westminster is just icing on the cake for her and a dream come true for me,” says Downs-Vollbracht.

In one case, Ticket spent up to 12 hours a day with a young patient suffering from Elhers Danlos syndrome, making a huge difference in her attitude and recovery. The syndrome is a group of inherited disorders that affect the patient’s connective tissues – primarily the skin, joints and blood-vessel walls. The tissue is a complex mixture of proteins and other substances that provide strength and elasticity to the underlying structures in the body.

Ticket’s prowess also extends to the other end of behavioral line. At a residential treatment facility, a young victim of abuse and neglect, was suffering from numerous behavioral and psychiatric problems, including cutting herself.

“She does not show emotion externally to her teachers or therapists,” explains Downs-Vollbracht, “but she hugs Ticket and cries softly as she holds her. She has bonded with Ticket and writes to her. Consequently, this has opened a channel for therapists to reach her.”

During a recent visit Ticket sat quietly with the patient for more than 45 minutes and slowly began to lick the cuts on her hands. “It was a very emotional and touching moment,” adds the owner, “and a turning point in the life of this young girl.”

Wrede adopted Logan from the Monmouth County (N.J.) SPCA when he was 1½ years old. He had already been deemed a “dangerous dog” and returned to the shelter four times. In other words: the ultimate underdog candidate for adoption.

“When I met him at the shelter it was love at first sight,” she recalls. “He is the first dog I have ever owned but I was willing to give him a chance, despite his history.”

Today he is a breed ambassador, she explains, having become a certified therapy dog and an agility performer. “He is the reason I started rescuing and fostering dogs. He has welcomed countless foster dogs into his home, and at 11 years of age he is close to retirement from agility.”

Logan’s initial therapy interaction was with a blind and mostly deaf hospice patient. Wrede and Logan visited her weekly. “She would gently stroke Logan’s head. I trained him to speak (bark) on command and she loved when I made him speak.”

Because Logan mirrored the appearance of a pit bull some staffers were initially scared of him but it wasn’t long before they felt at ease in his presence.

“He has taught me how to take risks, persevere, love unconditionally, laugh and most of all enjoy life to its fullest,” says Wrede.

For Collier, two St. Bernards, Patton and Sassy Girl, have given her a reason to live and push forward after suffering a stroke in November 2012. It was Patton at first, who refused to leave her side after her hand went numb. Thinking it was a pinched nerve, she took Advil and the numbness disappeared.

The next day it recurred. A friend drove her to the hospital and by the time she arrived the entire left side of her body was paralyzed. “What Patton tried to tell me for two days, the doctor diagnosed – I suffered a stroke,” recalls Collier.

Five days into her hospital stay, she began physical rehabilitation, but as Collier describes, “My muscles totally disregarded my efforts as my thoughts attempted to will movement into my paralyzed limbs.”

While taking a break she told the therapist about her dogs and showed her on a cell phone the many tricks she had taught them. “As I described the tricks, my hand executed the actions: find it (made a fist) and good job (turned my hand over and my fist opened). What my mind could not control, the words and hand signals used to train Patton and Sassy could control.”

She went on to try other Saint directives, and unwittingly she discovered “the secret to unlocking her muscles from their frozen state. Thereafter, I connected a hand signal and verbal command for every movement so nerve endings could reconnect or find new pathways.”

She continued her recovery at home with plenty of assistance from a friend and her Saints, with an “unyielding determination” to return to conformation showing with Sassy. Throughout 2013, her physical therapists taught Collier to walk, strengthen her muscles and use her left arm again. “They even offered to watch me work with Sassy at PT,” she adds.

To the cheers of dozens of friends, she and Sassy returned to the ring at the St. Bernard Club of America National last year in Nebraska, where they won Adult Amateur Showmanship. And last month their journey back included a special stop at Westminster.

Gable, a golden retriever, owned by Shari and Haley Curran, of Canton, Texas 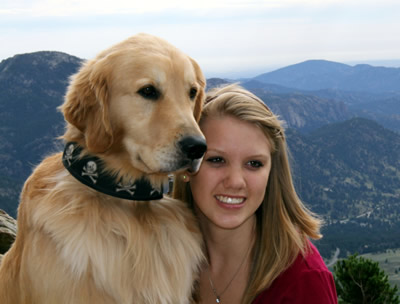 Haley, 15, and Gable came to the Big Apple and experienced Westminster for the first time last month.

While the sleek, smooth-gaiting golden grabs his share of attention, 15-year-old Haley is the story here.

She and her brother, Taylor, were adopted by Shari and Kevin Curran at the age of 26 months from Russia.

The children, according to Shari Curran, had been found starving and abandoned by their mother, an alcoholic. At 26 months, Haley weighed only 16 pounds and was suffering from malnutrition, which triggered scoliosis.

After arriving in the United States, Haley was diagnosed with Ricket’s, a vitamin D deficiency that becomes apparent during infancy or childhood and is rarely seen in this country. The child was unable to walk or talk and, according to Shari Curran, had never been around animals, seldom seen sunlight or experienced love and attention. Within six months and proper nutrition, Haley and her brother were fast on the road to recovery.

“Our family has long been involved in showing and training dogs,” says Shari Curran, “and Haley began training her golden retriever Merlot when she was 8 years old, putting an obedience title on him and becoming involved in conformation afterward.”

Haley adds, “I am very glad that I have found my passion so early in life. I love every aspect of training, grooming and showing dogs. The Westminster and New York experience were special.” In addition to showing Gable, she was able to visit several tourist attractions, ride the subway and attend a Broadway play, “Wicked.” 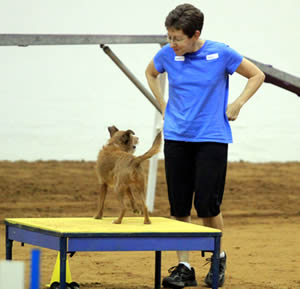 Jimmy was adopted from the Richardson (Texas) Humane Society at 10 weeks of age after being pulled from a “kill shelter” near Dallas at 7-8 weeks old. The long-legged, scruffy red-haired terrier mix has since become one of the premier agility performers in the country.

The 17-pounder recently earned a MACH 4 and is a registered therapy dog with Heart of Texas Therapy Dogs.

“I can’t quite describe the feeling I have when I run Jimmy, like we’re connected by a very thin elastic band that stretches and adapts to wherever we are in relation to one another,” explains McLean. “If we’re lucky, the band holds. If it breaks it probably means I made a mistake or got out of position. And I feel with each run that we learn something that we didn’t know before, even after almost eight years of competition.

“I always knew intellectually that each run can be anybody’s last because of the unpredictability of life. Now I feel it and try to make each run a happy experience for him.”

A couple of years ago, McLean’s professional and personal lives intersected when she participated on a panel on dogs and film at a film conference. The result: She has produced an anthology, “Cinematic Canines: Dogs and Their Work in The Fiction Film,” that is being published by Rutgers University Press this month.

Ranny Green / About Author
A Seattle Times pets columnist and feature writer for three decades before retiring in 2008, Ranny Green writes monthly features and book reviews for the Seattle Kennel Club. He is also the former president of the Dog Writers Association of America, a five-time recipient of the DWAA’s columnist of the year award and a six-time winner of the DWAA feature writer of the year for newspapers over 150,000 circulation. He is also a member of the prestigious DWAA Hall of Fame.
More posts by Ranny Green